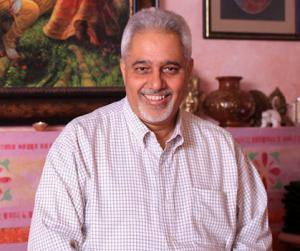 s a chef and restaurant owner Surinder is a wizard with spices. His favorite spice? That would be cumin.

Cumin seeds are rather potent. They have a pungent aroma, that can greatly enhance a dish beyond the ordinary. It has a prominent role in Ayurvedic medicine. It has numerous health benefits and works well in curries and a variety of other dishes.

Of all the dishes that Surinder has created and served to his legion of happy customers, his favorite is Saag Paneer, that delicious North Indian vegetarian combination of greens such as spinach (saag) and fresh cheese (paneer).

Try Saag Paneer at Lotus and you’ll be hooked as well.

As a longtime San Francisco Bay Area resident, Surinder’s favorite spot is in beautiful Marin County. Drakes Beach is far out West in Point Reyes National Seashore. If you’ve never been, you owe it to yourself to go see the cliffs at Drakes Beach!

Maybe someday Surinder will find a way to open up a small cafe and sell tasty appetizers to beach goers at this spectacular spot on the Pacific Ocean.

As many people in our community already know, Surinder’s favorite activity outside of work is simply helping other people. He firmly believes in Karma, so he would rather be giving than receiving because he knows that what goes around, comes around!

Karma is also why Surinder’s favorite holiday of the year happens to be Thanksgiving. The Lotus Family of Restaurants has a longstanding tradition of opening their doors on Thanksgiving to feed the hungry, the needy, and anyone in the community who simply wants a free meal. Surinder has been featured in local newspapers and TV for his extraordinary commitment to his community.

In 2016 Surinder was chosen a HERO OF MARIN by Pacific Sun magazine for his generosity.